The football title race appears to be down to six teams after round eight of the SSA OMFNL was completed on Saturday in cold conditions.

Albury survived a withering finish from Yarrawonga to take a five point victory while Wodonga could not penetrate a desperate Roos defence in a tense final ten minutes. Yarrawonga trailed by 41 points late in the third quarter, before steadily working its way back into the contest and almost snatched a draw in the last minute. The Pigeons missed three chances to goal in the final eight minutes with debutant Michael Gibbons missing from forty metres out that would have levelled the scores with thirty seconds remaining. The Tigers had outscored Yarrawonga in each of the first three quarters to build a nice buffer with Fletcher Carroll, Jessie Wilson and Brydon Hodgson dominating. Leigh Williams finished with four goals in a great tussle with Lucas Conlan. Leigh Masters, Logan Morey and coach Mark Whiley were the Pigeons best.

Corowa Rutherglen kept alive its finals prospects with a nail biting three point win over Wodonga in a slogging four quarter thriller.  Another best on ground performance by Roos midfield dynamo Cameron Wilson with forty possessions inspired the locals to the win as each side kicked one goal apiece in the final stanza. Hayden Filliponi was superb for the Roos setting up three goals and kicking three, while Jarryd Hatton and Joe Hansen were magnificent in defence. Angus Baker also had forty possessions for Wodonga, while Jacob Barber, Oscar Wilding and Charlie Morrison stood tall for the Bulldogs. Corowa Rutherglen remain one game and percentage behind Myrtleford and Wangaratta Rovers in fourth and fifth place respectively.

Wangaratta remain unbeaten after its eighth straight win, this time dismantling its 2019 grand final nemesis Lavington to the tune of 91 points at Wangaratta. Michael Newton led the way with six goals, while Daniel Sharrock landed two goals from his thirty six possessions. Veteran utility Daine Porter chalked up thirty possessions in a typical performance. The Magpies defence was outstanding allowing the Panthers just one goal per quarter with Michael Bordingon and mark Anderson in control. Ruckman Tim Hanna was again best for Lavington, with Billy Glanville, Drew Beavan and Ben Ashley Cooper all solid contributors.

Wangaratta Rovers did enough to defeat a much-improved North Albury winning by 42 points with Alex Marklew in good touch with four goals. The Hoppers were boosted pre game with the inclusion of former player Dom Brew who has been plying his trade with Werribee in the VFL. Brew racked up over thirty possessions and along with Julian Hayes, Tim Broomhead and George Godde ensured the Rovers did not run away with the game. The Hoppers were hellbent on a good showing with its 2002 premiership players enjoying a reunion to celebrate its flag victory over the Rovers.

Wodonga Raiders gave the visiting Myrtleford a big scare in the early stages of the game before losing by 51 points in an encouraging hit out. Ryley Sharp, Matt Munro, Murray Waite and Mitch Dalbosco took control after quarter time to see the Saints home and consolidate fourth place. Brendan Kantilla played his best game for the season for Raiders, while young guns Max Beattie and Max Glass further enhanced their class and quality for the years ahead. 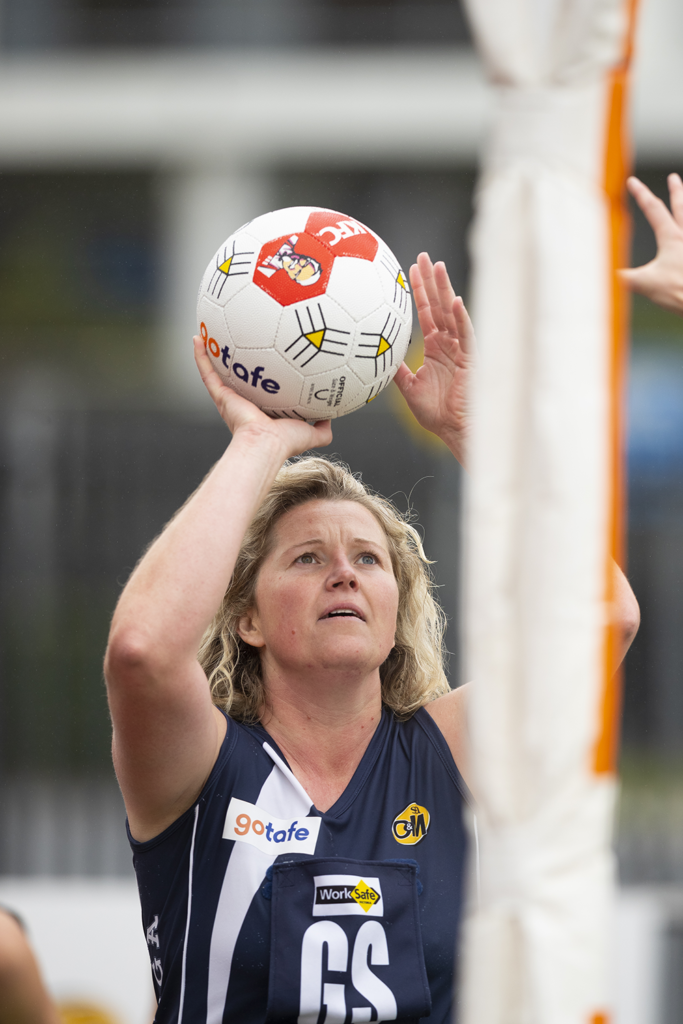 A welcome return to form by reigning premiers Wangaratta highlighted an entertaining round eight of netball action. The Pies inflicted the Panthers second loss for the season with a convincing 19 goal victory with Chaye Crimmins and Georgia Clark (41 gls) the stars. Lavington who have lost its early season spark were best served by Maggie Thompson and Taylor Furborough, while Maddy Plunkett landed 23 goals.

Yarrawonga slipped into second place following an impressive fifteen goal away win against Albury with Annalise Grinter best on court. Sarah Senini made her return from injury, while Matilda Kennedy was in great form. Alison Meani, Karina Cameron, and Sarah Jones were good for Albury.

Myrtleford has kept its season alive with a superb upset win over Wodonga Raiders with Sally Botter starring up forward along with Rebecca Piazza. The Saints after trailing by one goal at half time played its best half of the season to run out winners by eight goals. Mackensey House and Molly Goldsworthy were best for Raiders.

Fifth placed North Albury survived a huge scare against Wangaratta Rovers to hold on for a two-goal victory 45-43. Kelsey Lieschke and Sophia Kohlhagen were best for the Hoppers, while for the Rovers Jenna McLeod and Briony Simpson were tireless in the bold showing by Rovers.

Corowa Rutherglen were in a ruthless mood against bottom placed Wodonga and flexed its muscle in the 70-35 win with twenty-two goals coming in the first quarter. Wodonga played its best in the final quarter but found the class and intensity of the flag favourites to much despite a great game from Cassi Mathey in goal.