The Round Six “Rumble on the River” between Yarrawonga and Corowa Rutherglen highlighted another brilliant round football in the SS&A OMFNL.

The top three Wangaratta (24), Yarrawonga (20) and Albury (16) are clear of a hunting pack of four all on three wins Myrtleford, Corowa Rutherglen, Rovers, and Lavington.

The Sunday clash had it all with the big crowd at the John Foord Oval watching a pulsating Roos fightback that fell just seven points short in a genuine cliff-hanger. Yarrawonga looked like running away with the game after kicking the first five goals, before Corowa Rutherglen hit back with the next five to take a narrow half time lead. In the end a six-goal performance from Pigeon forward Leigh Williams was the difference despite five goals from Roos emerging star Kaelan Bradtke including three in the last quarter surge. 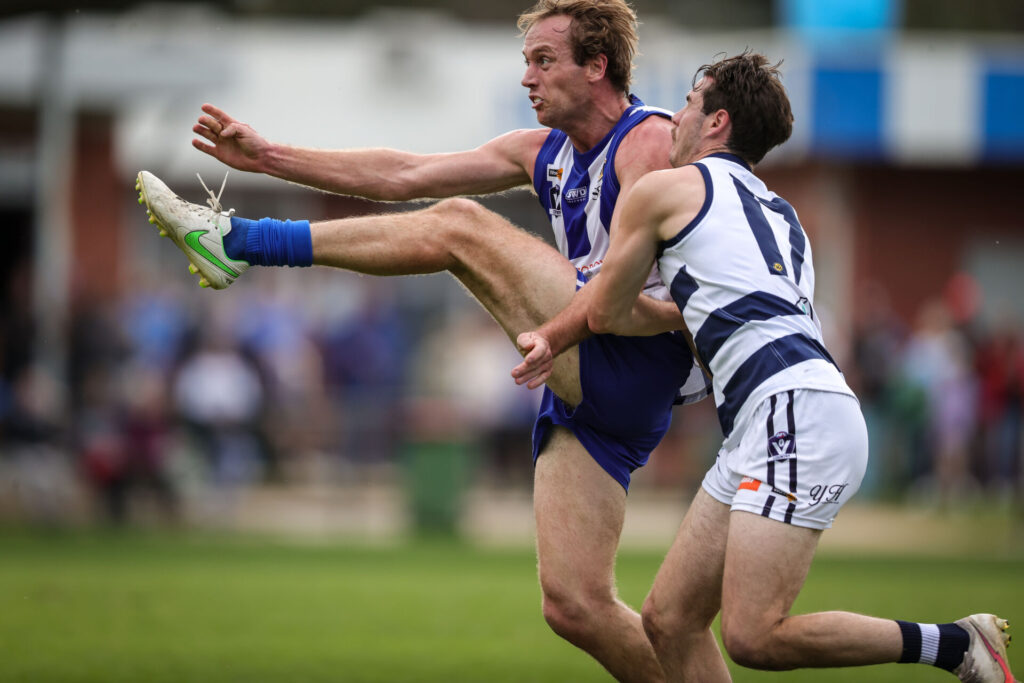 Wangaratta were confronted with its biggest challenge on Saturday and came away unbeaten with another impressive performance against a brave Saints challenge. The class of Cal Moore broke the game open early and bobbed up right throughout the game in the Pies 32-point win – by far its smallest winning margin in 2022. The performance of Wangaratta ruckman Chris Knowles outpointing Saints pair Cal Crisp and Dawson Simpson played a pivotal part. Riley Sharp continued his good form with five goals for the Saints while up forward Moore and Ben Reid both booted four for Wangaratta.

Wodonga kept alive its finals aspirations with a stirring 27-point win over Wangaratta Rovers at John Flower Oval with elusive forward Ethan Redcliff kicking five goals. The game was up for grabs at the final change, and it was Wodonga with five goals to one who wanted it more in a fighting effort. Angus Baker, Josh Mathey and Josh Clayton won the midfield battle, while the inclusion of Hudson Garoni (three goals) was a great foil for the dangerous Redcliff.

Lavington had to overcome the loss of key players pre game in Tom Hargreave and Luke Garland to hold off the much-improved North Albury at Bunton Park. The Hoppers after breaking a 1022 day winning drought the week before looked to be heading for two in a row after leading at quarter time and three-quarter time. The Panthers however lifted to kick five goals to two in that final term to win by 15 points with debutant Nick Newton rated best afield along with Billy Glanvill. Tim Broomhead showed his class for the Hoppers with six goals, while George Godde, Isaac Campbell and Archer Gardiner were excellent in the Hoppers gritty effort.

It was a day for the goalkickers at the Albury Sportsground when Albury defeated Wodonga Raiders by 52 points in a high scoring and highly skilled encounter. Jacob Conlan kicked six goals, while brother Lucas and Riley Bice both landed five. Max Beattie and Brendan Kantilla both kicked three for the Raiders in a much-improved showing by the visitors.

In a brilliant exhibition of OM Netball the highly skilled and talented Corowa Rutherglen went two games clear on the ladder beating a typically tenacious Yarrawonga 56-49. Grace Senior was awarded best on court for her 53 goals, while Sophie Hanrahan in defence along with Jen Barrett were not far behind. The third quarter proved the difference with the Roos gaining a six-goal advantage in that period. Maddy Allen was in great form for the Pigeons.

Wangaratta Rovers celebrated its first win of the season with a 44-28 victory over Wodonga with Mikaela Trethowan best on court for Rovers. Leah Mathey was best for Wodonga, while sister Cassi shot eighteen goals.

Lavington Panthers continue to impress as they climb into outright second position, after they beat the dangerous North Albury 61-41 at the Paula Carey Courts. Maddy Plunkett with 38 goals was dominant up forward with Emily Stewart, while the inform Steph Clancy was as busy as a bee in mid court attacks. Nat Heagney was her usual busy self around the goal ring for the Hoppers along with former Hume League rising star winner Sophie Kohlhagen.

After scores were locked 14 all at half time between Albury and Wodonga Raiders, it was the home side Albury who took over in the second half. The Tigers with Karina Cameron dominating along the shooting ability of Skye Hillier and Alison Meani they ran away with a 40-31 win and keep finals hopes alive and kicking.

Wangaratta made a return to the winners list with a convincing second half performance to overpower Myrtleford 50-37. Hannah Grady and Georgie Clark were best for the Magpies, while for the Saints their best were Ellie Cooper and Sally Botter.