Has the top five been settled in the SS&A OM football? It just may well have been following the final two matches to complete round eleven.

Albury shored up its top three credentials with a comfortable 53-point win over the injury ravaged Corowa Rutherglen at the Albury Sportsground. The Roos mounting injury list climbed with Jy Lane  appearing to dislocate his shoulder in the third term and then Cody Howard limped off in the last with a hamstring concern.

The Tigers though were just to classy with ball gathering running machines Fletcher Carroll and Jake Gaynor leading the way with a mountain off possessions. Jeff Garlett and Jacob Conlan both bagged three goals, while Connor O’Sullivan bagged two in another impressive game in just his second senior outing. The Wilson brothers Cameron and Damian were typically tenacious, while skipper Joe Hansen and Jy Lane (until injured) were excellent. 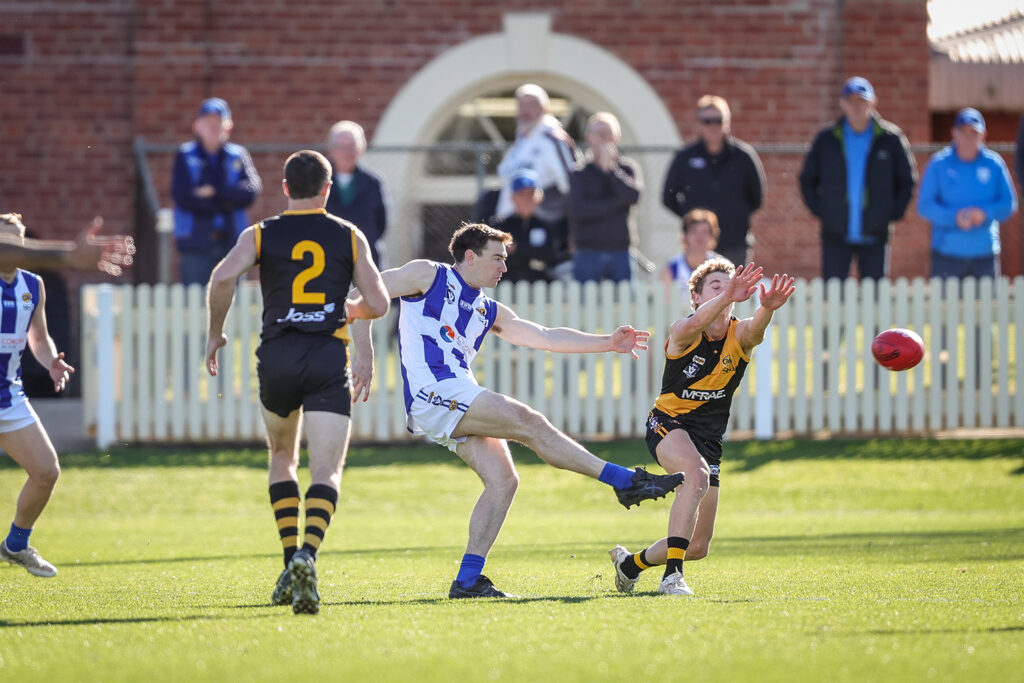 The loss for the Roos leaves them now two games and just over sixteen percent behind fifth placed Wangaratta Rovers in their bid for finals action.

A similar margin was the order of the day at Bunton Park with Myrtleford setting up a 55-point win with an eleven goal to three first half.

Simon Curtis was in great touch with thirty-three possessions, while Matt Munro in his last schedule appearance before heading overseas collected twenty-four. Ryan Griffin again impressed for the Saints with two goals, while Tom Cappellari and Nick Warnock both booted three goals.

The Hoppers had their fourth coach of the season take the helm with Tim Broomhead filling in for the unavailable Clint Gilson (Covid) and Corey Lambert (unavailable). Julian Hayes and Clay Thomas were both excellent for North Albury with over sixty possessions between them. North Albury showed great fight and character in the second half matching the Saints for most of it with George Godde, Ryan Polkinghorne and Doulton Langlands prominent. 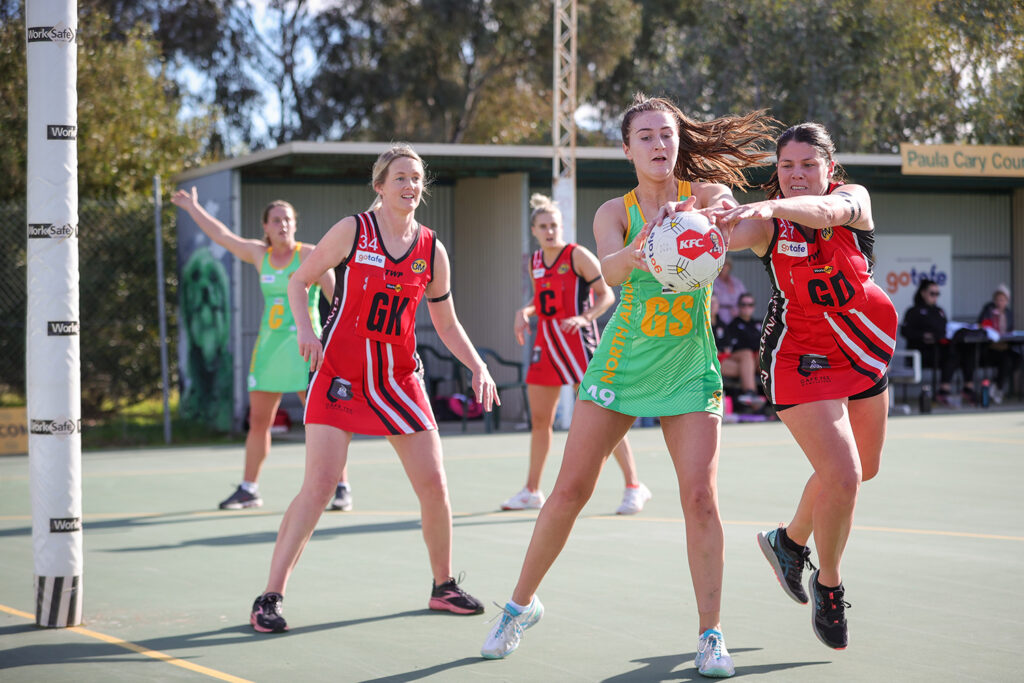 Myrtleford has alive its faint finals hopes in OM netball with a pulsating come from behind victory over fifth placed North Albury at Bunton Park.

The Saints looked no chance when they trailed by four goals with three minutes remaining and then still three goals behind with one minute and forty on the clock. They nailed the final four goals of the game to leave the Hoppers and its supporters stunned by the miraculous Myrtleford victory. Sally Botter scored the final goal with ten seconds left and despite a late forward  flurry from the Hoppers the Saints held on for a dramatic victory.

Saige Broz was back to her very best for Myrtleford, while Rebecca Piazza with 32 goals was instrumental in the late burst to victory. Nat Heagney with 32 goals and Niamh Boyer were best for the Hoppers who are still fifth but with just six points separating fifth to eighth on the ladder.

Corowa Rutherglen after a sluggish start eventually shrugged off a tenacious Tiger performance to remain unbeaten with the 51-35 result. The Tigers gave it everything and managed to keep the Roos to its lowest score since round three, with superb games from Alison Meani and Kristen Andrews.

Roos sharpshooter Grace Senior with forty goals now has 437 for the season. Others to shine were defender Sophie Hanrahan and Zali Spencer.

The shock loss by North Albury was a great result for the Tigers who are just half a game behind the Hoppers for that final spot in finals.